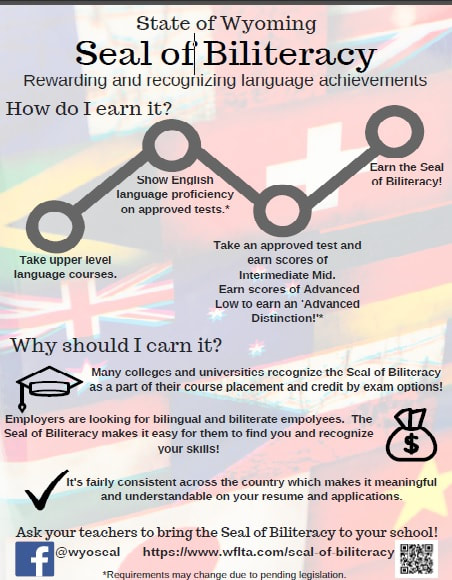 A SoBL bill sponsor was found in the Wyoming Senate, and legislation was drafted in 2019, but it has yet to make it to the Senate or House Education Committees.  When the legislation failed to be introduced in February of 2021, the Task Force decided to tackle the issue on two fronts.  We will continue to pursue legislation in 2022 while also trying to move forward through the Wyoming Department of Education.  We are currently recruiting support from Wyoming business and tourism organizations as our next steps as we continue this journey forward.

Despite the lack of a statewide award, Wyoming has had two school districts offer Seal of Biliteracy awards in the past few years with at least 32 graduating seniors earning them.  A few middle and elementary schools have offered Pathway to Biliteracy awards as well since 2017.


​Bring the Seal to your School!​
Access the WY Seal of Biliteracy Google Drive
(You may need to request access.)

​National Information Regarding the Seal of Biliteracy

​Proposed Requirements for the Seal of Biliteracy in Wyoming